Joining via video conference, McBryde performed an acoustic version of Never Will’s opening track “Hang In There Girl,” praised by Rolling Stone as an “anthem of solidarity” and dubbed as “soulful heartland rock” by Stereogum. Prior to her performance, McBryde shared background on the song.

“It’s actually a true story, verbatim. I did see a young girl, about 15 years old on the side of the road when I was driving through Watertown. She looked pretty frustrated and she reminded me a lot of myself when I was growing up. I grew up in a really rural area, and I’m proud of how I was raised. But there were times when I was in my teens, that I was frustrated and just couldn’t wait to get out of there. I really wished I could have stopped and tell her, ‘Hang in there, you’re really going to look back on this fondly.’

“Especially with everything that’s happening in the world this week, ‘Hang In There’ is something we’re all having to tell ourselves and each other,” she continued.

Released April 3, Never Will has since garnered critical acclaim from NPR, Rolling Stone, Billboard, Variety, Paste and many more. The Washington Post states, “McBryde’s lyrics almost always stick up for the wounded, the flawed, the lonesome and the misunderstood,” while Wall Street Journal claims McBryde has “moved to the forefront of today’s country, and this consistent, exciting and always smart album shows why.”

Never Will also landed on SPIN’s “The 30 Best Albums of the Year (So Far)” asserting, “the hard exterior can’t disguise the poignance and poetry all over Never Will,” and Esquire’s “The Best Albums of 2020 Give Us Exactly What We Need Right Now” observing, “McBryde’s 2018 debut, Girl Going Nowhere, announced a new heartland rock force to be reckoned with, and if she’d just done more of the same here, chances are she would have still made this list. Instead, she went further. With ace explorations of bluegrass (‘Velvet Red’), Fleetwood Mac-esque uplift (‘Never Will’), and bone-rattling rock (‘Voodoo Doll’), McBryde’s slinging whisky while her peers sip soda.”

McBryde will host her Trybe Virtual Fan Club Party this Friday, June 5 at 2:30 p.m. CT. All members of the fan club can participate in the party on The Trybe website and premium members can enter to win a virtual Meet & Greet. Register for The Trybe for free HERE.

Never Will is available everywhere HERE.

About Ashley McBryde
Ashley McBryde learned how to sing sad songs in a biker bar off a rural Arkansas highway–– and it shows. Her 2018 major label debut Girl Going Nowhere (Warner Music Nashville) charmed the New York Times, NPR, Rolling Stone, Paste, The Washington Post, and more, all en route to landing a GRAMMY nomination for Best Country Album. McBryde closed out 2019 with ACM New Female Artist, CMT Breakout Artist of the Year, a New Artist of the Year win at the 53rd Annual CMA Awards and two nominations for the 2020 GRAMMYs for Best Country Song and Best Country Solo Performance for “Girl Goin’ Nowhere.” Her follow-up Never Will, released April 3, was tagged by Rolling Stone as one of the most anticipated of the year alongside NPR, who also ranked lead single “One Night Standards” as one of the best songs of 2019. Produced once again by Jay Joyce, Never Will reveals the witty, confessional, detail-driven songwriting addressing a wide spectrum of blue-collar Southern women’s experience introduced on Girl Going Nowhere is still here, but perhaps even sharper. The music itself is stadium-ready rock-and-roll with a bluegrass wink or two and country music’s storytelling heart––and McBryde, no longer new, is the music’s ordained and highly capable standard bearer. McBryde is currently nominated for two 2020 ACM Awards for Song of the Year for “Girl Goin’ Nowhere” (artist + songwriter) and another nod for Music Event of the Year as a guest on Miranda Lambert’s “Fooled Around and Fell In Love.”  For more information, visit AshleyMcBryde.com or follow her at Facebook.com/AshleyMcBryde, Instagram @AshleyMcBryde and Twitter at @AshleyMcBryde. 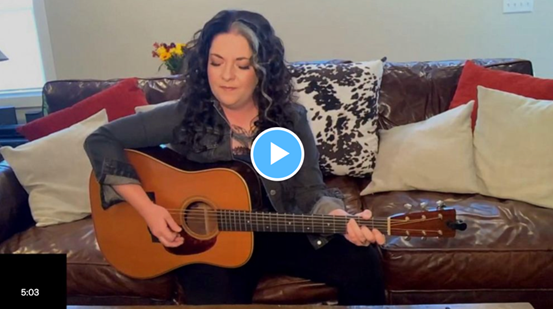