“The thing about this time -- in life and in music -- is that connection matters even more when we can’t be together,” says the Mammoth Spring, Arkansas native. “Physical distancing is tough, however socially I don’t know that I’ve ever talked to my band, fans, family and friends more over the phone or facetime than I have in these last few months.

“In the rare opportunities when we do gather to play you music -- if you look closely during the performance Saturday on CBS -- one thing only the Trybe may notice is the teary eyes and look of pure joy in Chris’ [Harris, acoustic guitar], Matt [Helmkamp, electric guitar] and my eyes as we played music together for the first time in a really long time and we got to do it on the Ryman stage. I hope our joy in performing these songs for you comes through and helps lighten your mood this weekend like it did ours.”

The follow-up to her GRAMMY-nominated debut, Never Will was released April 3 as one of NPR and Rolling Stone’s most anticipated projects of 2020 and has continued to gain momentum, earning a title as one of the best albums of the year so far by Rolling Stone, SPIN, Esquire, Variety, Billboard, Paste, Stereogum and American Songwriter.

Upon its release, Never Will grabbed the attention of critics, with Variety claiming McBryde’s “rowdy and emotionally stirring second album represents the pinnacle of what contemporary mainstream country can be,” while Wall Street Journal declares McBryde has “moved to the forefront of today’s country, and this consistent, exciting and always smart album shows why.”

American Songwriter praises, “McBryde’s husky vocals and self-aware personality struts with confidence” and “Never Will proves the tough gal persona she established on that stunning debut was no fluke or act,” as SPIN elaborates, “but the hard exterior can’t disguise the poignance and poetry all over Never Will.”

Earlier this year, McBryde took to NPR’s “Tiny Desk” to perform four songs from Never Will, including current top 15 single and one of NPR’s “25 Best Songs of 2019” “One Night Standards,” along with album opener “Hang In There Girl,” “Velvet Red” and “Sparrow.” Watch her performance HERE.

Never Will is available everywhere HERE.

About Ashley McBryde
Ashley McBryde learned how to sing sad songs in a biker bar off a rural Arkansas highway–– and it shows. Her 2018 major label debut Girl Going Nowhere (Warner Music Nashville) charmed the New York Times, NPR, Rolling Stone, Paste, The Washington Post, and more, all en route to landing a GRAMMY nomination for Best Country Album. McBryde closed out 2019 with ACM New Female Artist, CMT Breakout Artist of the Year, a New Artist of the Year win at the 53rd Annual CMA Awards and two nominations for the 2020 GRAMMYs for Best Country Song and Best Country Solo Performance for “Girl Goin’ Nowhere.” Her follow-up Never Will, released April 3, was tagged by Rolling Stone as one of the most anticipated of the year alongside NPR, who also ranked lead single “One Night Standards” as one of the best songs of 2019. Produced once again by Jay Joyce, Never Will reveals the witty, confessional, detail-driven songwriting addressing a wide spectrum of blue-collar Southern women’s experience introduced on Girl Going Nowhere is still here, but perhaps even sharper. The music itself is stadium-ready rock-and-roll with a bluegrass wink or two and country music’s storytelling heart––and McBryde, no longer new, is the music’s ordained and highly capable standard bearer. McBryde is currently nominated for two 2020 ACM Awards for Song of the Year for “Girl Goin’ Nowhere” (artist + songwriter) and another nod for Music Event of the Year as a guest on Miranda Lambert’s “Fooled Around and Fell In Love.”  For more information, visit AshleyMcBryde.com or follow her at Facebook.com/AshleyMcBryde, Instagram @AshleyMcBryde and Twitter at @AshleyMcBryde. 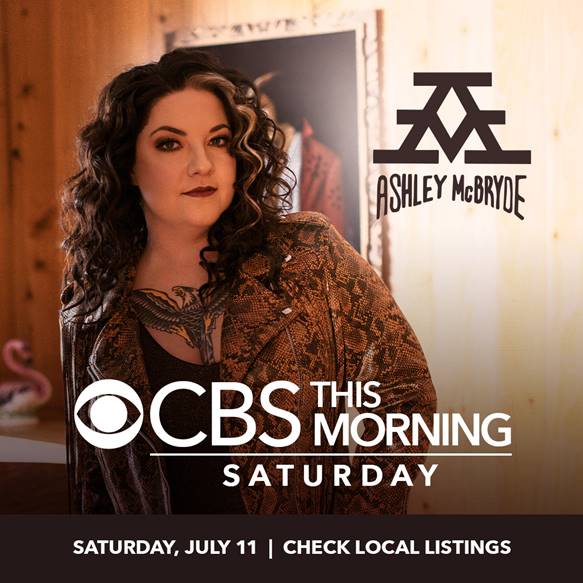